While my schedule this semester is, on the whole, a pleasing one, there is one class in particular that stands out from all the rest. Part of this has to do with how closely it aligns with my interests both in the arts and in Baltimore itself. Still, a large degree of its appeal lies in how direct of an engagement it demands of my classmates and me. Most of my humanities courses up until this point have required a great deal of class participation given their small sizes and discussion-based formats, but the one I’m about to describe takes the concept of interactive class settings to another level.

GhostFood: A Curatorial Practicum with The Contemporary 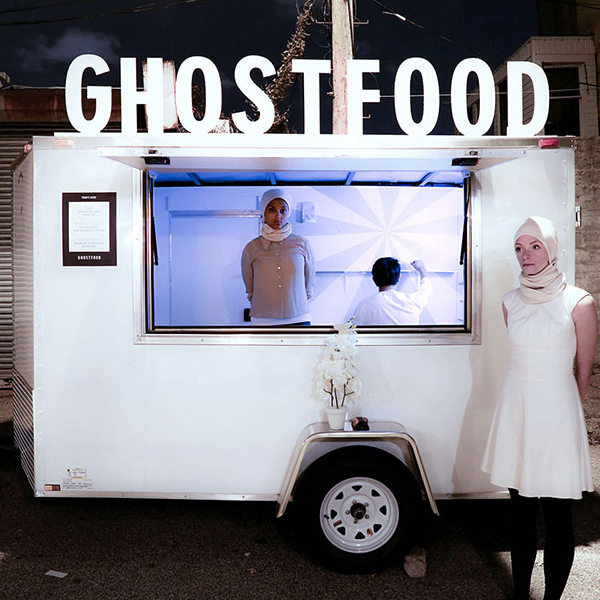 How to describe GhostFood? I’ll start by safely assuming that it’s the first class of its kind at Hopkins. Essentially, it’s a collaboration between my classmates and I and The Contemporary, a nomadic contemporary art museum here in Baltimore. We’re working all semester to discuss, plan for, and ultimately perform in The Contemporary’s upcoming exhibition of GhostFood, created by artist Miriam Simun. The truck is a ‘futuristic food truck,’ so to speak, that serves food in a way that may be the norm in the not-so-distant future. In the words of the exhibition blurb, “Scents of foods threatened by climate change are paired with foods made from climate change-resilient foodstuffs, providing taste illusions of foods that may soon no longer be available.” Rather than attempt to explain this further but then inadvertently muddle things up, I’ll just send you here.

I could write and ramble for far too long about the many reasons why this class stands out (apart from the obvious). As I briefly mentioned before, my classmates and I will be the ones performing in GhostFood. Admittedly, I went in thinking we would be talking to and semi-directing the performers, so the day we began assigning who would perform at which performance certainly came as a bit of a shock. The idea of playing an actual role was something I approached with trepidation at first, but as the weeks have gone on, it’s proven to be a unique and powerful way for me to engage with the piece and understand the multitude of implications that hide behind first, second, and even third impressions of it. Socioeconomics overlay environmental awareness, which is, somehow, further  nuanced by triggered nostalgia, all of which (and more) we have to prepare for in engaging with our inevitably diverse and uncontrolled audience.

Outside of my obligations as a performer in GhostFood, there are, of course, my responsibilities as a student. Let me remind you (and myself), this is still a class. Yes, we’re putting up a piece of performance art multiple times in the coming months at various quintessential Baltimore locations, but we’re also meeting for two and a half hours each Monday and reading everything from the history of peanuts to Autonomy, Antagonism, and The Aesthetic during the week. We’re analyzing GhostFood’s place in artistic discourse, but also in the scientific, futuristic food truck spectrum. Class participation requires not only discussion of Claire Bishop’s opinions on relational antagonism, but also that we get up in front of each other and practice performing in character for Miriam to direct/critique us. It’s a singular experience that I cannot wait to share in full.

I decided to devote an entire blog to this class partly because of how weirdly superb it is, but also for the precedent it sets for humanities courses at Hopkins. GhostFood requires the sort of hands-on approach that people generally associate with science and math-oriented classes here — think building a robot or participating in lab — but that has just as much importance in the other facets of a liberal arts education. It feels like we’re “building” something in GhostFood, but rather than it be technology for BME Design Team or computer code, it’s a real live art exhibition, a very different apparatus for people to interact with/use as they will. While I still have my moments of performance nervousness and insecurity about art-related naïveté (Tiravanija! Hirschhorn! Palais de Tokyo! I just learned about all of these things!), they ultimately contribute to my passion for the class and for the personal interests of mine to which it relates. I’m beyond grateful for what GhostFood has taught me thus far, and I can only hope that Hopkins creates more humanities courses like it in years to come.